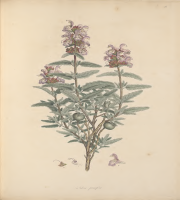 Greek sage is an evergreen shrub growing to 1 m tall. The leaves are grey green with undulate margins and have a strong odor and flavor, resembling lavender and common sage. Its natural habitat includes rocky slopes, limestone cliffs and macchie from sea level to 800 m. Flowering from April to May.

a. Is recommended as a drink or poultice against pulmonary diseases with fever.

b. In Regimen 2 Greek sage is described:

a. As dry and stationary.

c. In Nature of Women:

a. Is recommended in case of uterus displacement.

a. As drink is described as galactogen and is recommended in cases of milk stoppage.

a. As uterus analgesic.

The leaves are used as an adulterant of sage as a commercial food flavoring. An infusion of the herb is used to make a tea. Semi-transparent galls are formed on the plant because of gall wasps invading the young branches. These galls are made into a kind of conserve or sweetmeat by crystallizing them in sugar and this is regarded as a great delicacy by the Greeks. They have an agreeable and astringent flavor. An infusion of the dried leaves is used medicinally in Greece that in excess may cause profuse perspiration, languor and even faintness. The leaves are said to have the same properties as common sage (S. officinalis), but to be stronger in their action. These properties are antihydrotic, antiseptic, antispasmodic, astringent, carminative, cholagogue, galactogen, stimulant, tonic and vasodilator.