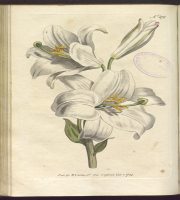 White lily  is a bulbous perennial plant that  unlike other lilies, grows a basal rosette of leaves during winter, which die the following summer. A leafy floral stem, which generally grows 1.2 - 2 m tall, emerges in late spring. Its natural habitat is the under canopy of mixed Mediterranean forests. It is native to the Balkans and Middle East. Flowering in midsummer.

a. White lily root as a decoction promotes menstruation and acts as a placenta purgative.

In the early days of christianity, it was dedicated by the church to the Madonna, probably because its delicate whiteness was considered a symbol of purity. The bulb, only, is employed for medicinal purposes, having highly demulcent and somewhat astringent properties. Bulbs are collected in August and used both dried and fresh. Owing to their highly mucilaginous properties, the bulbs are chiefly employed externally, boiled in milk or water, as emollient cataplasms for tumors, ulcers, and external inflammation. Made into an ointment, the bulbs remove the pain and inflammation arising from burns and scalds, which they cure without leaving any scar.