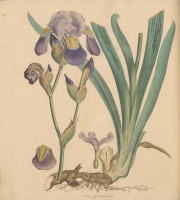 Bearded iris is a perennial herbal plant with thick rhizome 60-120 cm tall and elongated leaves 30-40 cm long. It is a European hybrid, rather than a true wild species with parent populations Iris pallida L. and Iris variegata L., thought to be originated in Mediterranean Europe. Flowering during May.

a. For genital fumigation.

a. As aromatic oil is used as post birth purgative.

a. As vulval suppository against uterus bleeding.

b. As uterus purgative.

The fresh root is a powerful cathartic, and for this reason its juice has been employed in dropsy. It is chiefly used in the dry state, for complaints of the lungs, for coughs and hoarseness, but is now more valued for the pleasantness of its violet-like perfume than for any other use. Fresh roots have an earthy smell, the characteristic violet odour is gradually developed during the drying process and does not attain its maximum for at least two years, and even intensifies after that time. The essential oil may, therefore, be included in the class of so called 'ferment-oils.'