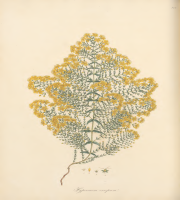 Curled-leaved St John’s wort is a perennial herb to 50 cm high with a dense tangle of thin branches, glabrous but spotted with small black glands. Sap is resinous. It is naturally found in phrygana expanding to Mediterranean woodlands and shrublands, semi-steppe shrublands, and montane vegetation. It is native to the central and east Mediterranean basin. Flowering June to July.

a. Mixed with Greek sage as a painkiller.

b. Mixed with sweet wine is drunken as an expectorant.

b. In Nature of Women:

a. Curled-leaved St John’s wort mixed with wine is indicated as enema.

b. The previous remedy is used for the treatment of uterus flatulence.

a. Against vulval secretions.

b. Against uterus bleeding.

The aerial parts of the plant are antiseptic and astringent. They are applied as a healing agent to wounds. Extracts of the plant have been shown to be useful in the control of postprandial blood glucose, their effects being achieved mainly through inhibition of carbohydrate metabolizing enzymes (amylases and glucosidases). Due to the mechanism involved in controlling blood glucose, such plant extracts are expected to be also helpful in the management of obesity. The aerial parts of the plant have been shown to have a moderately strong inhibitory effect on the production of pancreatic lipase, thus helping to lower lipid levels in the body. It could, therefore, have a role to play in the treatment of obesity.