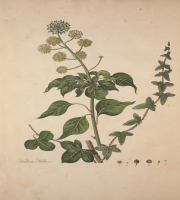 Ivy is a vigorous, aggressive, fast-growing, woody evergreen perennial that is primarily grown as a climbing vine or trailing ground cover. As a climbing vine, it may over time grow upwards to 20–30 m in height, while as a ground cover, it typically grows to 25 cm tall. It is naturally found in moist, shady locations and avoids exposure to direct sunlight. It is native to Europe, southwest Asia, and northwest Africa. Flowering from September to October.

a. Against uterus deviation.

b. Ivy leaves mixed with olive and mulberry leaves is used against vulval ulcers and itching.

a. Ivy berries or leaves mixed in wine as a conception stimulant drink.

a. Against uterus bleeding.

Ivy berries are somewhat poisonous to humans, but ivy extracts are part of current cough medicines. In the past, the leaves and berries were taken orally as an expectorant to treat cough and bronchitis. The leaves can cause severe contact dermatitis in some people.