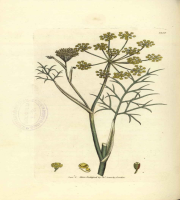 Fennel is an upright, branching, herbaceous perennial that is typically grown up to 2.5 m height and bears feathery, compound, aromatic, yellow-green leaves with needle-like segments. It grows mainly in disturbed grounds and presents an anthropogenic distribution dominating roadsides. It is native to the Mediterranean and Black Sea basins expanding north to Scandinavia. Flowering June to July.

a. Tree wormwood mixed with fennel are used against uterus deviation.

b. As menstruation stimulant.

a. As birth stimulant.

b. Against closing of uterus entrance.

a. For purgative fumigations.

Fennel fruit is chiefly used medicinally with purgatives to correct the flatulence. The volatile oil of fennel has these properties in concentration. Fennel tea formerly is employed as a carminative, and a syrup prepared from fennel juice was given for chronic coughs. It is one of the plants which is said to be disliked by fleas, and powdered fennel has the effect of driving away fleas from kennels and stables.