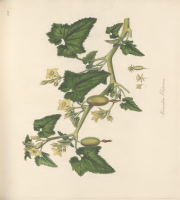 a. In Internal Affections:

b. In Nature of Women:

The action of this extract resembles that of the saline aperients but is much more powerful. It is the most active hydragog purgative known, also causing much depression and violent griping. When injected subcutaneously, it is inert, as its action is entirely dependent upon its admixture with the bile. The drug is undoubtedly valuable in cases of dropsy and Bright's disease, and in cases of cerebral hemorrhage, threatened or present. It must not be used except in urgent cases, and must invariably be employed with the utmost care, especially if the state of the heart be unsatisfactory. In the 21st century, elaterium and its constituents are considered a poison, with several case reports of hospitalization, edema of the uvula, and necrosis of the nasal mucosa resulting from nasal or oral consumption.