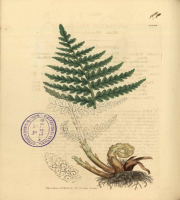 Male fern is a large, arching, deciduous fern with erect, stout rhizomes and medium green blades that grow from 60 to 90 cm tall. Its habitat is damp shaded areas in the understory of woodlands, but also shady places on hedge-banks, rocks, and screes. It is native of the temperate northern hemisphere, much of Europe, Asia, and north America.

a. Male fern decoction prepared from the root grinded in wine is used for birth induction.

The liquid extract is one of the best anthelmintics against tapeworm, which it kills and expels. It is usual to administer this worm medicine last thing at night, after several hours of fasting, and to give a purgative, such as castor oil, first thing in the morning. A single sufficient dose will often cure at once. The powder, or the fluid extract, may be taken, but the ethereal extract, or oleoresin, if given in pill form, is the more pleasant way of taking it. The older herbalists considered that 'the roots, bruised and boiled in oil or lard, made a good ointment for healing wounds, and that the powdered roots cured rickets in children.