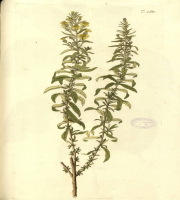 False yellowhead is an erect, densely glandular annual 20-50 cm tall, smelling of camphor. Flowering occurs during summer and autumn.  Its habitat includes dry riverbeds and abandoned fields but also roadsides and ruderal habitats, even in urban areas. It is native in the Mediterranean region.

a. As a menstruation stimulant.

a. As placenta extraction stimulant.

b. For the abortion of dead embryo.

a. For the promotion of conception.

b. For uterus displacement.

Τhis plant is sticky and has a certain smell that most people find unpleasant. It contains an essential oil and has been used in traditional medicine since ancient times, especially in the Levant, as an astringent. A yellow dye substance has, since ancient times, been produced from its roots.