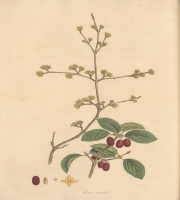 Cornelian cherry is a deciduous shrub or small tree growing to 5–12 m tall, with dark brown branches and greenish twigs. It flowers in clusters between February and March, well before the leaves appear, and fruits in early to mid-summer.  It is native to central and southern Europe into western Asia.

a. In Instruments of Reduction:

a. Use cornelian cherry sticks of the same length and diameter, with attached stripes, for the construction of tibial narthex.

Cornelian cherry was used from the seventh century BC onward by Greek craftsmen to construct spears, javelins and bows, the craftsmen considering it far superior to any other wood. The wood of C. mas is extremely dense and, unlike the wood of most other woody plant species, sinks in water. This density makes it valuable for crafting into tool handles, parts for machines, etc. The fruit is edible, but the unripe fruit is astringent. When ripe, the fruit has an acidic flavor which is best described as a mixture of cranberry and sour cherry; it is mainly used for making jam, but also can be eaten dried. The fruit is used for distilling alcoholic drinks, while it is eaten with salt as a snack in summer, and traditionally drunk in a cold drink.