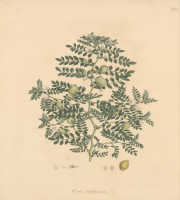 Chickpea is a spreading to erect, annual plant growing up to 100cm tall. It is a cosmopolitan cultivated legume, which is unknown in the wild. It is flowering in early spring and fruits middle to late summer. It is originated from southeastern Turkey, and the Levant.

a. Regimen in Acute Diseases (Appendix):

a. Chickpea – raw and cooked – cause flatulence and pain.

a. Chickpeas are nutritional and diuretic.

a. Against uterus bleeding.

b. Decoction as uterus purgative.

The chickpea is a key ingredient in Mediterranean and Middle Eastern cuisines, used in hummus, and, when ground into flour, falafel. Ancient attributed medical uses such as increasing semen and milk production, inducing menstruation and urination, and helping to treat kidney stones to chickpeas.