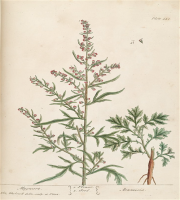 a. In Regimen in Acute Diseases southernwood is recommended:

a. For the treatment of pulmonary disorders as expectorant.

b. In Nature of Women is indicated:

a. As menstruation promoting agent.

c. In Diseases of Women 1 is described:

a. As birth stimulant.

b. As post-birth purgative.

d. In Diseases of Women 2 is recommended:

a. For the treatment of hysteria.

b. For deviated uterus.

The chief use of southernwood is as an emmenagogue. It is a good stimulant tonic and possesses some nervine principle. It is given in infusion or tea which is agreeable, but a decoction is distasteful, having lost much of the aroma. Considerable success has also attended its use as an anthelmintic, being chiefly used against the worms of children. The branches are said to dye wool a deep yellow. Its dried leaves are used to keep moths away from wardrobes. In Italy, it is used as a culinary herb. In Bosnia, aerial parts of Artemisia abrotanum are used in jaundice therapy.