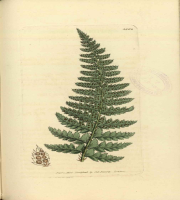 a. In Fistulas maidenhair fern is recommended:

a. For the treatment of abscess orifice translocation.

b. In Diseases 3 is described:

a. As a treatment for jaundice.

c. In Nature of Women is recommended:

a. As menstruation stimulant and placenta abortive.

d. In Diseases of Women 1 is described as:

e. In Diseases of Women 2 is recommended:

a. For the treatment of leucorrhea.

b. As uterus purgative.

Its chief use has been as a remedy in pectoral complaints. A pleasant syrup is made in France from its fronds and rhizomes, which is given as a favorite medicine in pulmonary catarrhs. It is flavored with orange flowers and acts as a demulcent with slightly stimulating effects. This plant is used medicinally by native Americans, internally for rheumatism, as a lotion for bumblebee and centipede stings, and smoke it or take it internally to treat mental illness. In Iran, frond infusion is used for jaundice therapy.